As described here Kate will soon be twenty.

But just to have some official date, let's say Kate was born at 14th December 2000, in a bit over one month Kate will turn officially twenty ;=)

I think we already had the basics that we still have around today: some split-able main area for the documents and tool-views for stuff like a document list or terminal. We had no tabbed document switching, by design. 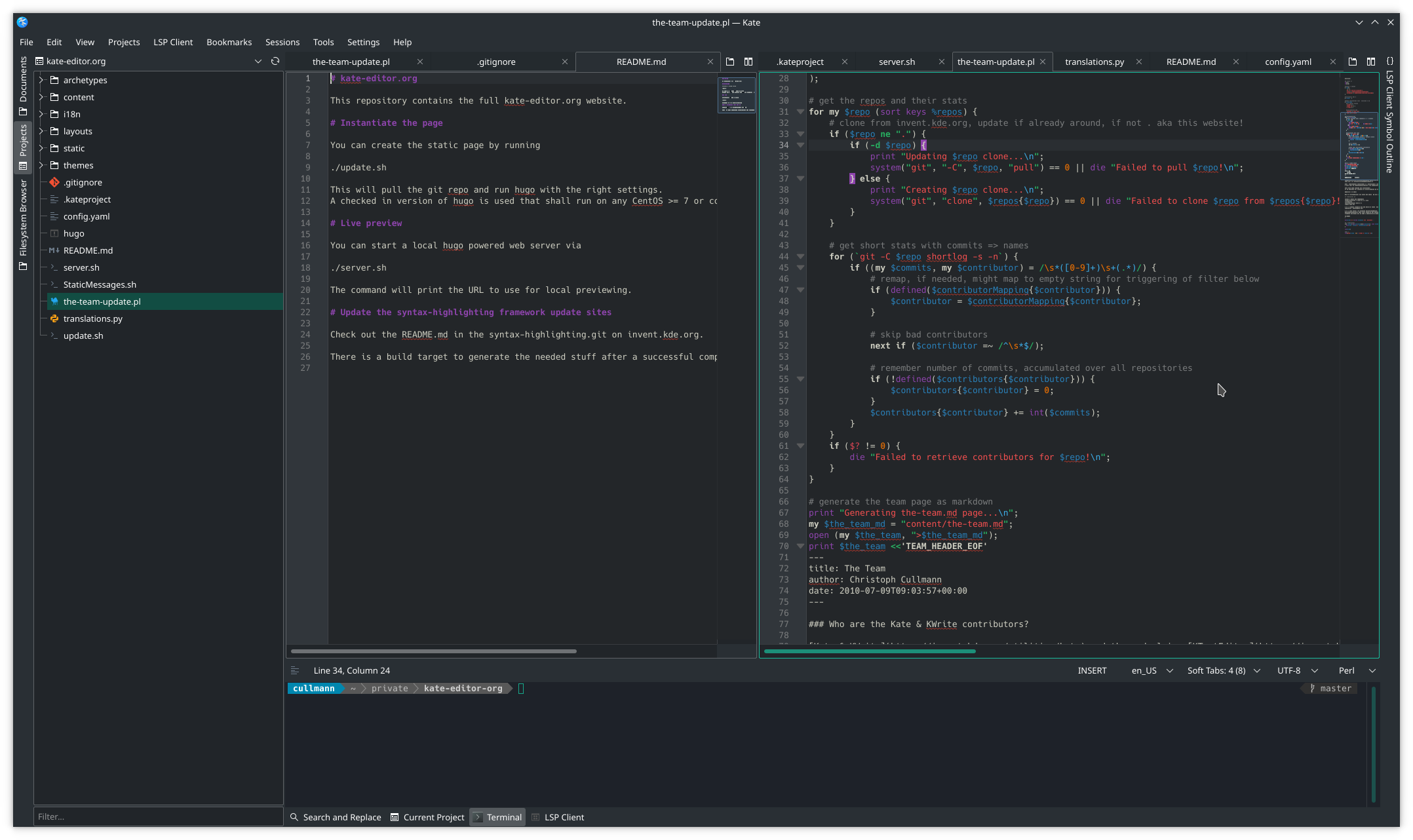 That means we spend 20 years just to change the color theme to something dark and add some tabs ;=) Not bad, isn't it?

Fun aside, the screenshots show: a lot of the basics did stay the same over the 20 years.

But that doesn't mean that not a lot of the underlying stuff changed drastically.

We amassed a lot of features over that time period, too.

The original Kate/KWrite/KTextEditor/... had by far not the syntax highlighting we have today or any kind of working auto indentation, it had not that many nifty editing actions, you could only dream from decent code completion.

And I would not have thought that it ever really works well on Windows.

How will it continue?

How the project will continue depends on the contribution we get.

I am very happy with the progress of the last few years.

We gained more traction again and with the switch to our GitLab instance we got a lot of contributions merged in the past months.

If you have some itch to scratch, step up and provide a patch!

Look at what we got merged already since we are at invent.kde.org:

I think this is nice and I hope this continues that way (or even speeds up).

Even after 20 years, Kate is not dead nor abandoned.

I think that is a nice achievement by all people that contribute now and in the past to our stuff.

Unfortunately not a lot people that helped to start this have stayed with the project, but that is life, priorities shift, jobs change, ...

;=) Not everybody can be a loner that has time to maintain something for two decades.

I want to thank all contributors!

Even this incomplete auto-generated list contains more than 500 people that contributed stuff in the past 20 years.

Thanks that you helped to enhance Kate and keep it alive and kicking for two decades.

And I hope Kate will continue to be well for the near and far future ;=)

Let's provide some viable text editor alternative for users out there, be it on some Linux/BSD/... system or Windows.

And to our users: Thanks for picking Kate as your editor!