At this year's KDE conference Akademy we discussed how to evolve Kate over the next years. One of the areas we want to improve is better git integration out of the box. Currently, Kate ships the Projects plugin, which automatically detects and loads your file structure from your git repository. If a project is loaded, then the Search & Replace plugin allows to search&replace in all project files. In addition, the Quick Open feature also supports opening files from the currently active project - all explained here.

However, the Projects plugin does not provide any real git integration: You can neither pull nor push, commit, diff, etc. If at all, additional git functionality is available only via external tools like gitk or git-cola (e.g. available in the context menu).

This is something we would like to change by having really nice git integration.

Since we don't have the resources to start a git client from scratch, we had a quick look at existing git clients, preferably written in C++ and Qt5. What we found so far:

Back in 2007, the Qt-based git client QGit emerged. QGit is still alive and maintained. However, no new major features seem to be added either. QGit is licensed under GPLv2.

Just some weeks ago, two blogs appeared on planet.qt.io about GitQlient, which is a fork of QGit. As discussed in part 1, the idea of GitQlient is to have a nice widget that can be embedded into Qt Creator. This idea is elaborated a bit more in the follow-up part 2. The GitQlient additions are licensed under LGPLv2+, but given it's based on QGit, the effective license is GPLv2 only for now. 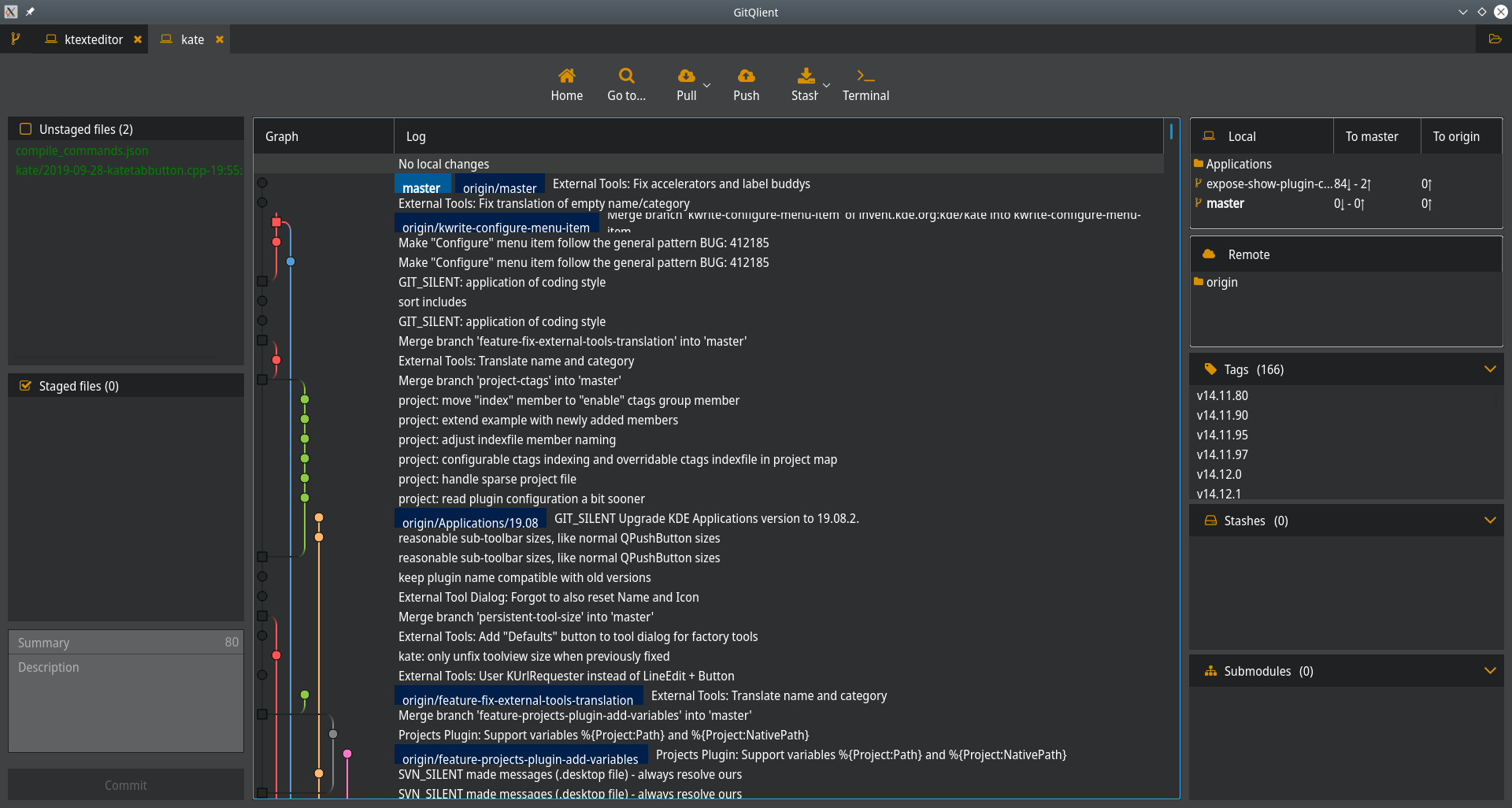 What's nice about GitQlient is that it is Qt5-based and uses just 74 .cpp/.h files, and has only a total amount of 11393 source lines of code (slocs) including API documentation and empty lines. So it's not that much code, which is good maintenance-wise. However, both QGit and GitQlient currently are one-man shows, so the developer base is rather small at the moment.

Another Qt5-based git client that caught our attention is gitahead. gitahead seems to be a full-feature git client with many features. What's very nice about gitahead is: It's licensed under MIT license. However, the source code is much larger: ~52000 slocs. In addition, the 3rd party dependencies include e.g. scintilla and many other libs, adding another ~184000 slocs. Compared to QGit/GitQlient this is 20 times more, and many dependencies we certainly would not want in Kate. 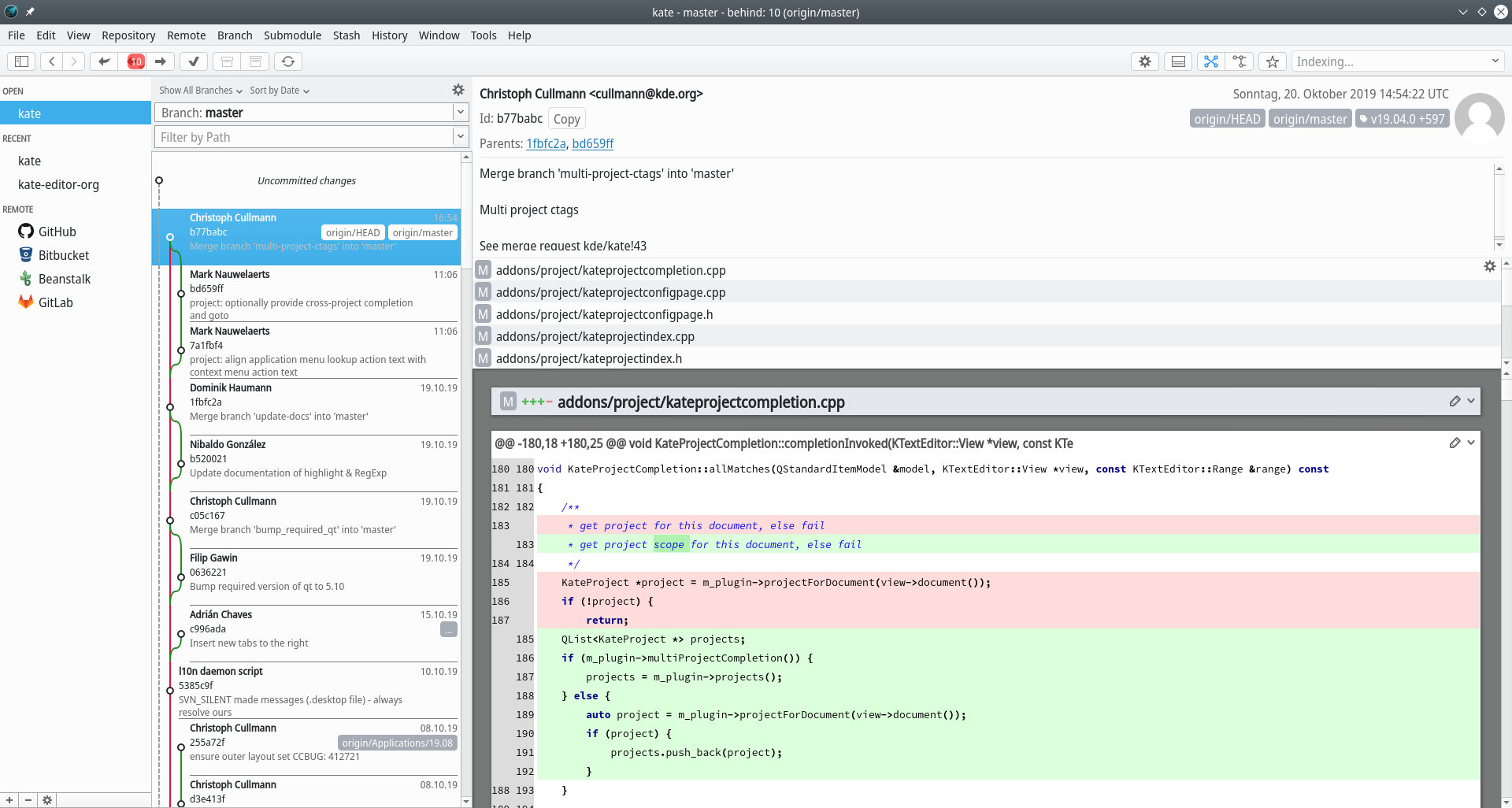 At this point, nothing is decided yet. As it currently stands, GitQlient looks a bit more promising, since it's simply much smaller code-wise and therefore likely easier to adapt to Kate. If we decide to give GitQlient a try, I'd like to contact the initial and current QGit authors to try getting it relicensed from GPLv2 only to GPLv2+ or even LGPLv2+.

If you know of any other Qt-based git clients that can nicely be integrated into Qt/Kate, then please join the discussion at the KDE subreddit.