With the KDE Frameworks 5.50 release, the KSyntaxHighlighting framework was re-licensed to the MIT license. This re-licensing only covers the actual code in the library and the bundled themes but not all of the syntax highlighting definition data files. One of the main motivation points was to get QtCreator to use this, if possible, instead of their own implementation of the Kate highlighting they needed to create in the past due to the incompatible licensing of KatePart at that time (and the impossibility to do a quick split/re-licensing of the parts in question). [Read More]
planet

Just as quick info: For some time, there is a sticky thread on r/cpp about who is hiring C++ developers. This thread gets cleaned quarterly, so all the open jobs listed there are likely still open. The same was just started on reddit for r/Qt5: Who’s Hiring Qt Devs – Q4 2018: So if you are looking for either C++ or Qt jobs, this is a good place to have a look at from time to time. [Read More]
planet

During Akademy I once more was a bit disappointed how bad the project plugin of Kate can cope with out-of-source builds. At work, we use in-source-builds, as we normally only build in one configuration and have no issues with left-overs in the source directories locally. For this use-case, the project plugin works really well. You have your project local terminal view and that allows you all normal things you need during work, e. [Read More]
planet

After fixing some first porting bugs to KSyntaxHighlighting, code folding (non-indentation based) is back working, too.

There is a still a lot to do (and e.g. the syntax colors are still kind of randomized), but already all KTextEditor original highlighting code is gone without ending up in an unusable state. 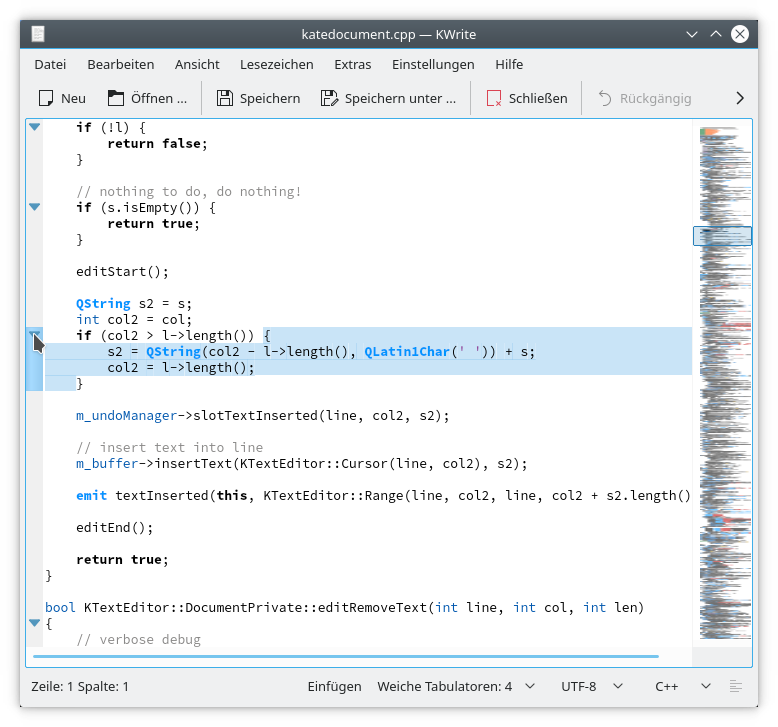 After several years, the time has come that KTextEditor finally starts to use more of KSyntaxHighlighting than just the syntax definitions resources. At the moment, we still do everything on our own (parsing the xml, doing the highlighting, …) and only use the XML files bundled inside the KSyntaxHighlighting library as “code sharing”. I started a “syntax-highlighting” branch in ktexteditor.git to change that. Dominik helped out by starting to add missing API to KSyntaxHighlighting that will ease the porting. [Read More]