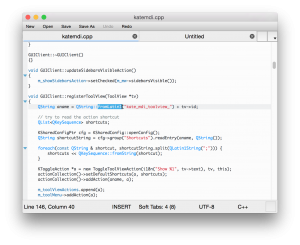 But as you can see, we have no icons, but that is as no work was invested into it and not even any icons are installed ;=)

I will maintain a guide how to build it on mac in the kate.git/mac.txt file. At the moment, this is all not that nice. Kate is able to open files via file dialog and it renders OK, modulo some glitches.

Still a long way to go, ATM the application bundle contains just the application binary + plist + icons. The libraries are still found only because of they are were they were compiled & installed. Plugins are not found either, need to take a look if that is just missing env vars or more.

At least, this is far better than at the beginning of the year, were all I had was instant segfaults.

Kate runs here btw. without any dbus server running, which means file opening in that window via command line won’t work, but still, compared to KWrite, which crashs on open dialog because of dbus missing, that is nice ;=)