After some hacking on frameworks, I have the first running KWrite version on Mac that uses an unpatched Qt from the qt.io offline installer: 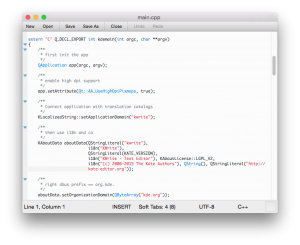 It is still ugly, as scaled on my HiDPI display as the plist file is missing and it crashs on everything (aka open dialog) and has no icons.

But beside that, it works.

Script that did the job (still some patches to frameworks missing in master that remove optional deps and fixes linking), it is available in updated form in kate.git:

The changes will benefit Windows builds, too, as they made the dependencies a bit smaller. You for example need no longer phonon to get this running, nor do you need to hassle around with the xslt/xml doctools on Windows.

Patches that are needed t to be applied to have this working: