KDE has a very handy feature to switch keyboard layouts on the fly. This is for instance useful if you use the German keyboard layout by default, and the US layout for programming. To enable keyboard layout switching, go into System Settings > Input Devices (category Hardware) > Keyboard item > Layouts tab: 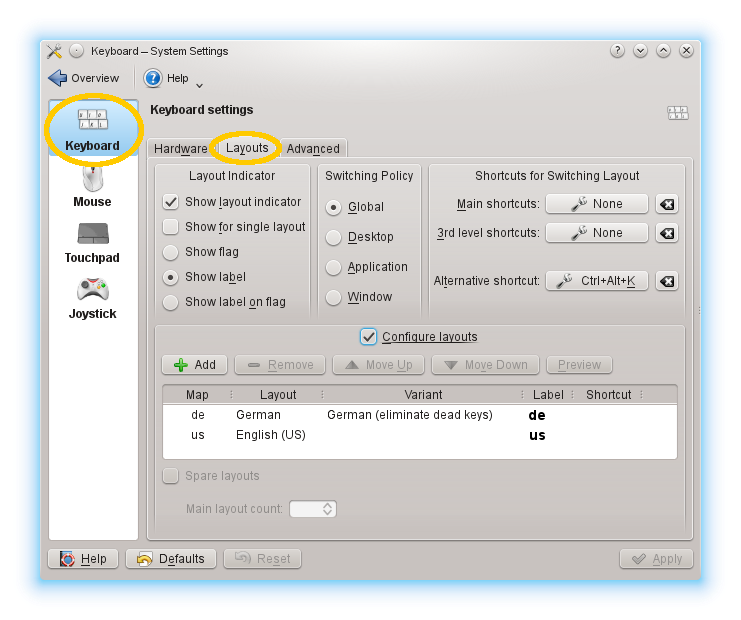 Here, ‘[x] Configure layouts‘ is checked, enabling the list view. I added the German keyboard layout, and then the English (US) layout. Notice also, that the shortcut is set to ‘Ctrl+Alt+K‘. Clicking apply, a tiny little indicator appears in the panel:

You now can quickly switch with Ctrl+Alt+K between the German and the US layout. Quite efficient, especially since the keyboard layout config page allows to switch the language on application basis.

Getting more into detail reveals that the order of the keyboard layouts in the first screen shot is of importance: If you first add the German ‘de‘ layout, and then the English ‘us‘ layout, then the shortcuts will always use the Germany keyboard layout, independent of what keyboard layout is chosen.

So it seems that the order defines a priority, and the shortcuts always use the first entry in the list.

The correct solution to fix this would (in my humble opinion) be to add an option ‘[x] Shorcuts follow keyboard layout‘ or similar. But since this option does not exist, let’s do a quick hack to still get what we want here.

First we reset the shortcut in the settings of the keyboard layout options: 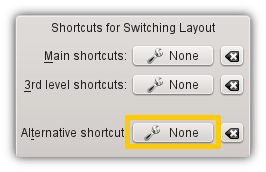 Click apply and close the dialog. Now, the shortcut ‘Ctrl+Alt+K‘ is unbound. Our idea is now to create a script that toggles the keyboard layout by calling setxkbmap with the appropriate parameters and bind this script via a global shortcut to ‘Ctrl+Alt+K‘.

To this end, we first have to create the script. So let’s first type `setxkbmap -query` in the console and check the output. For me, this results in:

From this, we can follow that the current xkb layout is achieved with:

Now, let’s switch the de,us to us,de and try the following:

Notice, that the keyboard layout indicator in the panel switched to ‘us‘. Calling the first variant with de,us again, we get back to the German layout.

This discovery leads us to the following script switch-keyboard-layout.sh:

Save this script somewhere to switch-keyboard-layout.sh and make it executable with

Each time we execute this script, the keyboard layout is toggled.

Next, we go into System Settings again and navigate to Shortcuts and Gestures (Common Appearance and Behavior), there in the Custom Shortcuts we add a new Command/URL item named ‘SwitchKeyboardLayout’ as follows: 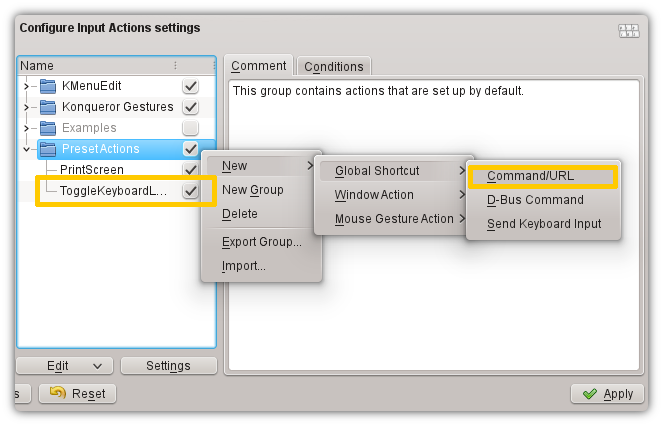 As a comment for this new item, we write ‘Switch Keyboard Layout‘, in the ‘Trigger‘ tab, bind the global shortcut to ‘Ctrl+Alt+K‘, and in the ‘Action‘ tab, choose the switch-keyboard-layout.sh script. Finally click Apply, and close the dialog.

Now, hitting Ctrl+Alt+K calls our script and correctly toggles the keyboard layout including the shortcuts.

Unfortunately, this approach does not support e.g. switching the keyboard layout on application basis as the switching policy of the Keyboard settings (first screen shot) allows. Still it works.

A final remark, though: For GTK applications this works out of the box. So is there any real reason why this is not the case for KDE / Qt applications? A real fix would be very much appreciated, I’d be also fine with an option. But not providing this feature at all is very thin ice…

Update: This issue was reported as KDE bug #197552 in 2009, and resolved as an upstream issue. However, it never was reported to Qt upstream. If I may say so, this is not how resolving bugs in KDE usually works. Grrr…