That’s basically it! The result looks like this (with a nice fade-in and fade-out animation):

As developer, once you called postMessage(), you can safely forget the message pointer. It’s automatically deleted either if the user closes the notification, or if the document is closed or reloaded. The API for more tricks. You can add multiple actions through KTextEditor::Message::addAction(), which then appear as buttons. For each added action, you can control whether triggering the action should close the widget or not.

Further, you can set an auto hide timer through Message::setAutoHide(int timeInMilliSeconds).

If you want a message to only appear in one specific KTextEditor::View of the Document, you just call Message::setView() before calling postMessage(). If several messages are in the queue, the one with the highest Message::priority() is shown first.

This notification system is already used in Kate Part by the data recovery (swap files), or to show a notification when loading remote files, and in some other places.

The cool thin is that this solution requires no special code in KateView or other classes, hence, it’s a perfectly clean solution with an easy-to-use API. You as KTextEditor user (developer) should definitely consider using it when it’s public.

Note: The MessageInterface is a KTextEditor interface; however, since the 4.10 branch is frozen for BIC changes, we cannot just add this interface for KDE 4.10. Instead, for Kate Part users (Kile, KDevelop, …) this interface will only be available in KDE5.

Finally, an example of all four message types: Positive, Information, Warning and Error: 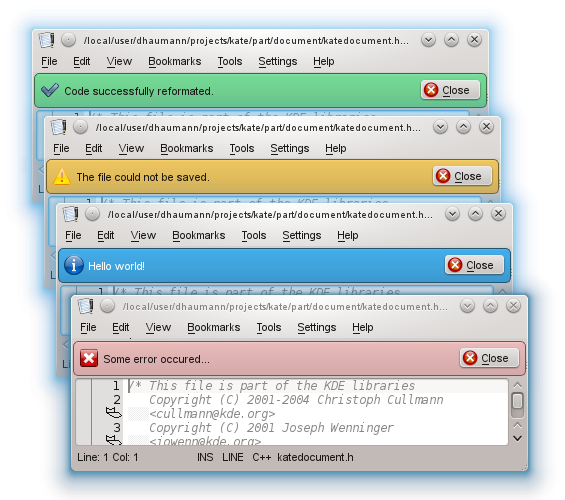