Up to KDE 4.9, Kate Part had support to remove trailing spaces in two ways:

The reasoning behind removing trailing spaces while editing is that when working on a document, we want to keep our own changes clean of trailing spaces. This way, we can for instance provide patches that are not cluttered with whitespace changes, and we just change lines that we really want to change.

The implementation of this feature unfortunately had quite some regressions that we were able to “fix” over time. For instance, you do not want to remove trailing spaces if the cursor is currently in the trailing spaces area. This alone means we have to kind of remember that we touched this line, and then remove it later. This was always hacky, and in fact, there are still corner cases that did not work.

For KDE 4.10, the both options were merged into just one option Remove trailing spaces with three possible values: 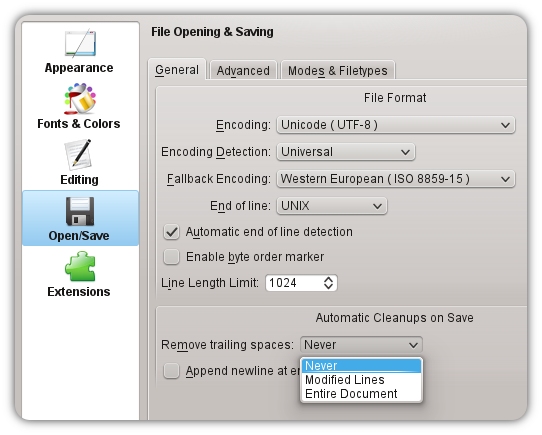 For compatibility, the old mode-lines “remove-trailing-space” and “replace-trailing-spaces-save” are still supported, but you’ll get a kWarning() on the console. All these changes are also documented in the Kate handbook (once KDE 4.10 is released). From KDE 4.10 on, you should switch to the modelines