Kate is a multi-document editor part of KDE since release 2.2. Being a KDE applications, Kate ships with network transparency, as well as integration with the outstanding features of KDE. Choose it for viewing HTML sources from konqueror, editing configuration files, writing new applications or any other text editing task. You still need just one running instance of Kate. Learn more… 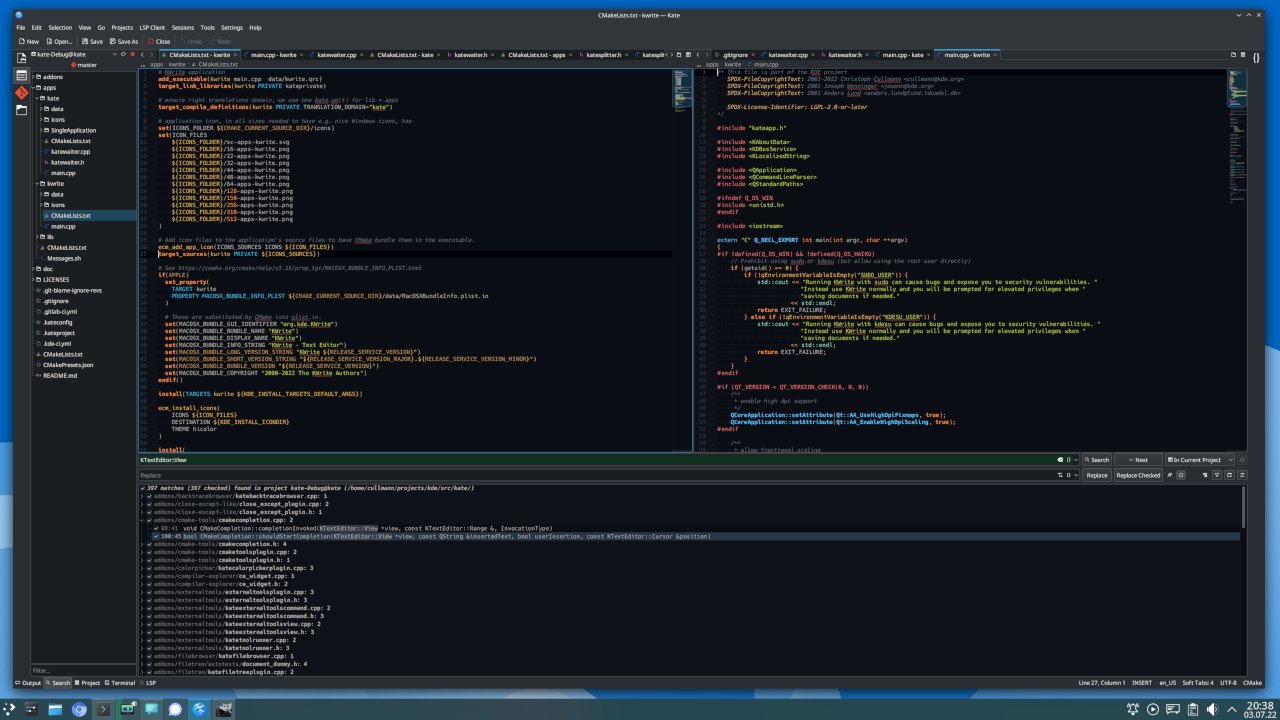 Posted on January 10, 2021  |  3 minutes  |  Christoph Cullmann
After my summary of Kate improvements in 2020, it is my pleasure to show a first improvement coming in 2021. Quick Open? Kate has since years a feature called “quick open”. You reach it via the button at the right of the tabs or the default shortcut “Ctrl-Alt-O”. Quick open will provide a list of the current open documents (and in addition files of the current/all active projects) for quick navigation between them. [Read More]

Posted on December 31, 2020  |  5 minutes  |  Christoph Cullmann
2020 was for sure no good year for most people around the world. A lot of us are affected directly or indirectly by the currently still raging COVID-19 pandemic. Let’s hope that 2021 will bring better fortune at least in this aspect. Still, good stuff happened in 2020, too, not all was bleak. I read already some wrap ups of 2020 from others like Nate and Aleix. A lot stuff happened inside the KDE community this year. [Read More]

Posted on December 20, 2020  |  2 minutes  |  Christoph Cullmann
The end of 2020 is nigh, let’s take a look at the current statistics of all applications in the Windows Store published with the KDE e.V. account. Since the last report in August we have a newcomer: LabPlot. Last 30 days statistics Here are the number of acquisitions for the last 30 days (roughly equal to the number of installations, not mere downloads) for our applications: Okular - More than a reader - 5,293 acquisitions [Read More]

Posted on December 13, 2020  |  2 minutes  |  Christoph Cullmann
Noise inside the terminal? I more or less always start my Kate session inside a terminal, to let the project plugin auto-load the right one for the current working directory. What I ignored for a long time is the noise this produces inside the terminal. If you launch Kate or KWrite, you will often get stuff like (even for release builds): kf.sonnet.core: Unable to find any suggestion for " [Read More]

Posted on September 28, 2020  |  8 minutes  |  Christoph Cullmann
One year in the store Kate is now in the Windows Store since a bit over one year, our initial submission went online on September 12, 2019. The submitted installers are always taken 1:1 from our very lovely Binary Factory. They just get some test drive if they behave well and then are submitted like described here with the KDE e.V. account. Therefore the most work was done by all the people that created and keep the Craft tooling & Binary Factory working! [Read More]

Posted on September 22, 2020  |  4 minutes  |  Christoph Cullmann
Thanks to the feedback & patches provided by others, I found a bit more motivation to take a look at the small things that seems to be odd in KTextEditor. Interesting enough, if you once notice a small detail (like a dead pixel on your display you suddenly find after years of use), it really sticks out like a sore thumb… Here two small things that caught my interest this week. [Read More]

Posted on September 18, 2020  |  4 minutes  |  Christoph Cullmann
Color theme? What? The KSyntaxHighlighting framework provides support for color themes. These color themes specify all colors (text/background/selection/…) and font style roles (italic/bold/…) that are used for the highlighting. The definition happens in some easy to understand JSON file format. Starting with the upcoming KDE Frameworks 5.75 release, all KTextEditor framework based application will support these color themes for their embedded editors. This includes Kate & KWrite, but naturally a lot more, like for example KDevelop, Kile and RKWard. [Read More]

Posted on September 15, 2020  |  5 minutes  |  Christoph Cullmann
A tab bar, that’s easy, isn’t it? You would think so… But this topic seems like an everlasting journey ;=) Or running in circles… A bit of history The evil past without tabbing (long long ago, far far away…) Kate did a long time not have tabbing. My initial design was a MDI editor with a list/treeview for the file selection. We had splitting very soon and some when in-between we had tabs around the split areas (like in good old Konqueror). [Read More]